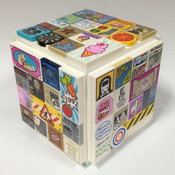 A little boy who likes to ride an orange bicycle has asked a little girl who likes to ride a red bicycle out, preparing to confess to her. The little boy had prepared chocolate and a love letter, not to mention the little girl’s favourite pie and milk. The little boy had a friend who likes to ride a blue bicycle. Knowing that he was going to confess, his friend brought his white kitten to join in the fun. The little boy could not stand his friend who not only butt in, but he was also there feeding his white kitten and eating ice cream while waiting to watch the fun. The little boy forgave his friend for the sake of the pizza that his friend brought him. The little girl had no idea about the confession and she had brought a green apple in the pink basket at the back of her bicycle and holding a green balloon in one of her hands. She would like to share the green apple with the little boy and play the green balloon with him as well. The other dogs and cats (along with a cute little bear in a wooden box) did not care about the confession at all (not to mention those money that had fallen behind them). They were only interested about whether or not they could have those delicious food in front of them (there were cookies and drumstick).