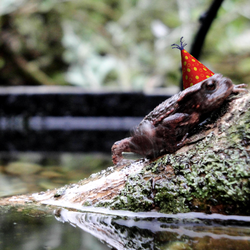 Johnny Thunder. Indiana Jones. Jake Raines. For years, Lego has been bringing us daring adventurers, who would seek treasure, ride cool vehicles and animals, and fight the bad guys in a selection of beautiful, beige-element-filled sets. But there is one man who has not yet been immortalised as a Lego minifigure: T.E. Lawrence, a British war hero who helped the people of Arabia to gain their freedom in a bold fight against the Turks, and the star of a classic and award-winning film, Lawrence of Arabia. Watching this film again recently, I was struck by how effectively it could translate into Lego sets, with its Bedouin warriors charging into battle on horses and camels, thrilling train raids, and stunning desert landscapes and Middle Eastern architecture. So I set to work, and here is the result.

Lawrence of Arabia is a single Lego set idea, featuring various key aspects of the film. It includes a Bedouin tent, an armed train carriage for transporting horses, an exploding track function, a British Headquarters building, an old-fashioned motorcar, three horses and a camel. A range of accessories are also included, from a map, book and bottles to a gold dagger, dynamite stick, and chests filled with coins and jewels. The 9 minifigures which I chose to include are: Lawrence himself (with both white Sherif robes and military uniform), Sherif Ali, Colonel Brighton, Mr Dryden, General Allenby, photographer Mr Bentley, a Bedouin warrior, and 2 Turkish soldiers. However there are many other memorable characters, such as Auda and Prince Feisal, who could feature in the set if this idea becomes a reality.

Due to the style of this set, it would fit very well alongside other sets from several themes, including Indiana Jones and City.

This is currently the only project on Lego Ideas based on Lawrence of Arabia, so if it sounds like a good idea to you, please do hit Support and spread the word. Every single vote counts, and all feedback is welcome too. Let's give Lawrence the Lego set he deserves!

Many thanks, and happy building!