Rey VS Kylo Ren Battle on Starkiller Base 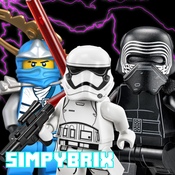 THE BATTLE ON STARKILLER BASE!!

This is based on the scene where Rey and Finn dueled Kylo Ren at the end of the movie. I built this set to portray the scene as accurately as possible, and I included the following features:

- 2 separate sides of the set is connected with technic pins. This is to portray the scene where the land splits between Rey and Kylo Ren

- A side of the model will feature the iconic scene of Rey overpowering Kylo  when it seemed like Kylo had won.

- Kylo Ren with his crossguard lightsaber

Vote for this project, you will.