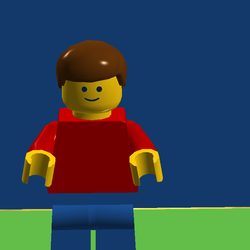 Hello. This is my project based off the new movie The Penguins Of Madagascar that came out on November 26th. This is the scene where the penguins hitch a ride on a canoe and the squids chase them. The set comes with 2 squids, a scooter rider, and Skipper, Kowowski, Rico, and Private. Plus one of the squid's phone. In the movie, the people in Italy where black and white suits, so that's as close as I could get in LDD. However, a new shirt would be nice. The squids have 2 tentacles because I couldn't find the 8 arms from the Lego Toy Story octopus. This would be ok, but it would look more realistic if it had it. The penguins can have new pieces for there bodies and designs, but we could stick with the original LEGO penguin design from Friends. If possible, Kowowski is tall, so maybe a taller Lego penguin for Kowowski. But, the other penguins are ok. The phone could have a new design too. I was thinking a black outline with a brick-ified version of Dave. The canoe music player, (that is not shown here) could come with a new LEGO guitar. To make the project a little bigger, we could add buildings. That's all I can say right now.