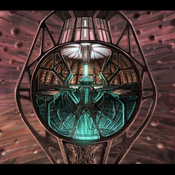 This is my LEGO TARDIS Main Control Room for Lego Ideas. I decided to build this after I saw the TV show, and also after the other LEGO TARDIS Set recently released. The top of my main console has 2 rotating circular pieces, just like in the TV show. Also, the middle of the console moves, like in the TV show. This Idea came from the popular British TV show, Doctor Who. I modeled the walls after Peter Capaldi's TARDIS, just after his regeneration from Matt Smith. The walls of my model can be folded outwards, to have more room to move the Time Rotor(the circular part in the middle of the console), or, just to have fun. The screens on my model are fully posable, you can rotate them, move them, push them, and everything. I think that this would be a good LEGO set because even though there is already a LEGO TARDIS set out, I think that mine is bigger, and a bit more detailed. I also recently added foldable walls, which I think will be fun for people of all ages. I think this would be  great set for serious Whovians and serious LEGO builders. Please, if you like this Idea and want to vote for it, please dont make it 100 dollars! It's definitely not worth that much. I think this set is worth about 50 dollars.