Christmas Day for Our Santa Claus 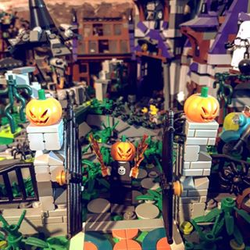 I present to you today my version of Santa Claus, the set represents him coming out of the chimney of a house where he left many gifts for nice little children!
Description :
This set is made up of 3 main parts :
- Santa Claus: he is detailed enough to best imitate the effects of his coat, hat and gloves with different slope curves and tiles, arms are articulated to move them as you want. He is stable on his chimney to highlight it
- Chimney: I tried to imitate the look of fresh, thick winter snow and an old clay bricks aspect for the main part of the chimney
- Hood: it is constructed from the same techniques as the "porg" which allows it to have a voluminous appearance as if it were filled with lots of gifts. Constructions of gifts and toys give a final touch to the hood and makes it look more real.
Why I build it ?
To occupy your time between a Christmas TV movie and the song of Mariah Carey "All I want for Christmas is you", stay in the mood building this 15x15x25 cm size and 1400 parts of magic bricks warning of the near arrival of Christmas.
After the feedback from people wishing to bring a real touch of originality to their decoration and show their attachment to the brand, I decided to make their wish possible by designing the main symbol representing Christmas - Santa Claus. It gives a real plus to the decoration of your Christmas tree.
Become a real LEGO set
Do you always dream to meet this wonderful character and you are crazy about Christmas decorations? This Santa Claus is waiting to meet under your Christmas tree, as a decoration or as a gift.
It is not an element of film or a successful license but it is known by many more people which gives it the faculty to reach a much wider audience. All the countries celebrating Christmas be millions of people.
Christmas decorations still exist but it doesn't give a real building experience for an adult who loves to decorate their house too. This set give them original techniques and a very realistic final aspect which allows it to be as much an element of fun as a decoration.
Young and adult will be delighted to participate in the decoration of their home as a family!
42
410
days left