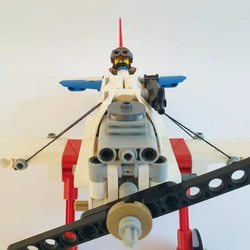 I recall building with Lego as a 4 year old child, I used to get so excited about starting a project in Lego of something I had just seen on TV, and that excitement has never left me.

My little model set here was inspired by the stuntmen and women of the post WW 1 era. The wing walkers, barnstormers and the racing car drivers. Here is the story of Major Marmaduke McCuddle ex fighter pilot and Air Ace of the Royal Flying Corps, and Olivia Dearheart-Mayberry, adventurer, expert mechanic and stunt driver.

The little team got together and acquired wartime parts and engines which enabled them to build the Mayberry - McCuddle Special, an aircraft of strength and agility, as well as the Hispano Suiza powered Nash Motors racing automobile.

The racing car was fitted to give an auxiliary start to the little aeroplane, which forms part of the fun in my Airshow Stunt team set.

Both models are Lego Technic with the odd studded Lego pieces as accessories.

The car's engine can be disengaged from the wheels to allow the start up cranking to take place, and re-engaged for driving....simple fun :)

I hope you have fun looking at the pics, and best of luck to everyone on this site.

Here is a small video clip of the model starting up: