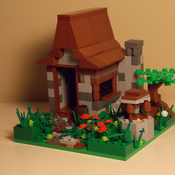 Hello Everyone! With this project, I have made a small but detailed medieval city, with a dragon attacking it! The dragon is custom made and has several joints in its body, so you can change the position of the dragon with ease. The city has 2 houses, a guard lounge, a dungeon, a small shop, 2 towers (very different), and stables with 2 horses.

I have built this on a 32x32 blue platform, so that there is a moat in front of the city.Upon entering the city, there is a main stairway that can get you to either of the houses, or the main castle tower. The city wall goes all the way around, with a bridge across the moat in the front.

To add motion to the scene, I have added many pieces to the moat, to give the appearance of ripples in the water. I have also placed several fire pieces, to show that the dragon not only breaths fire, but has also proven it to the poor townsfolk.

This set would come with 10 mini-figures total: 4 main guards, 2 crossbow archers, 1 wealthy princess, and 2 scared peasants. Please note: The green and black knight shown in the dungeon does not come with this, he is just there to show off the jail. It would also come with dragon, built from scratch.

When I had previously posted this idea, I had mixed up some of the pictures, resulting in a not so good first impression, so this is it revised!

Thank you very much for your potential support!