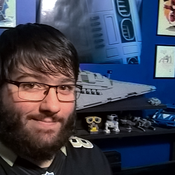 The V-80 StarHawk is a 6th Generation personal scout/fighter craft. It is designed for deep Space travel and is one of the fastest ships in its class. The twin neutron engines were retrofitted from a larger craft and are combined with in-line wing ion engines and directional fin-mounted thrusters. This gives it an unprecedented amount of power and maneuverability.

The V-80 StarHawk's singularity drive is capable of providing the needed energy for these engines as well as powering its various weapon systems and the Quantum Field Generator, which is used to hurtle the ship through the vast distances of deep space.

The V-80 StarHawk is equipped with wing-mounted twin Plasma cannons and eight Plasma torpedo launchers as well as two ion disrupters near the cockpit.

Other features include: personal storage for a blaster in the cockpit, a folding wing design with built-in landing gear allowing the craft to land almost anywhere large enough for it, and a fully outfitted control system with the latest in AI automation and HUD displays.

This Starfighter was a spur of the moment build for me; usually I build LEGO Mechs, outfitted with oversized guns and missile pods, (though I did build a VTOL recently). However, I've been considering attempting to build a space craft for a long time. When I found this awesome comic http://spacecatcomic.com/​ and saw the craft he flies, I knew I had found a design I wanted to work with!

The initial design was going to be much larger. I had started on some fold-out missile launchers in the wings with spinning gears and whatnot, but after making a few prototype wing structures I decided it would be much too large and not something I could have built without ordering large amounts of parts. So then I started over, keeping the general wing tip design, but scaling it down to be a more reasonable build.

The design went smoothly after that. The flip out landing gear was entirely accidental. I had never even intended to allow the wings to rotate down that far, but when I would set the model down I kept folding the wings vertically so it wouldn't collapse and decided adding landing gear would be a pretty cool feature!

There is the one issue with the cockpit. The grey section behind the canopy has to be hinged back before it can be opened. I've considered making it a solid lid that would lift off instead of hinging, but currently I think the hinged model is the best option visually at least.

I've never posted anything to this site before but I am pretty well established on Flickr and Deviantart. This model is the first thing I've built that I thought might have a chance to perform well in this environment. Hopefully you like it and will support it!!!

Comments and design suggestions are welcome!!! (especially about the canopy and minifig)