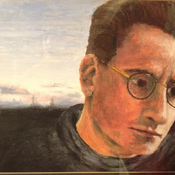 I have designed an American classic - the Peterbilt Semi Truck (or articulated lorry as we say in the UK).

This would sit in the Lego Creator range alongside the Mini Cooper and the Caterham Seven and has about 1100 pieces so could retail for about £80.

I have tried to use pieces from my own collection throughout the build however would love to have added some crome pieces for the front fender or the fuel tanks. From my research these lorries are frequently customised by their owners and I have tried to reflect this by mixing black, white, dark grey and light grey bricks.

If I had some thinner curved pieces I would adjust the front wheel arches to be thinner - if approved by Lego this would be an area to improve on whilst at the same time adding a thicker front tyre. Also creating hinged cab doors curtailed the interior space however this can be rectifiied.

I have given the truck two removable roofs for the cab and the sleeping area. The driver has a bed with a striped duvet and pillow plus a flatscreen TV above and a lamp to the side.

Hope you like it and can support my project, thanks.