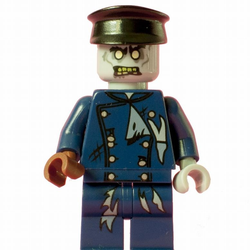 The goal of the design was to create a holiday train that is smaller than the train in set 10173, but has the colours and the "cuteness" that fits the season. With its 882 pieces it is easy to build and you don't have to have a lot of track to let it come into its element. For example you can easily let it run around your Christmas tree.

The train consists of a locomotive and four carriages. The locomotive is based on the 1302Z electric locomotive. The boxcar has two sliding cargo doors. The passenger car has two platforms and three seats inside. The open freight car can be filled with Christmas trees and/or presents. The caboose has one platform and in the interior a wood stove and a desk for the train guard. There are also four minifigures: a train driver, a train guard, one male and one female passenger. Throughout the train there is a lot of attention to small details that enhance the train: the season decorations on the side, the little star on the front of the locomotive, the stove and desk in the caboose, the removable rear light, ...