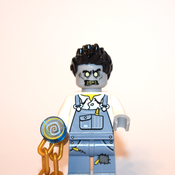 Edgar the intergalactic thief has stolen the Arquilian galaxy!

Only the Men in Black can stop him. The set I have built is a recreation of one of the best chases in sci-fi with one of the coolest cars too.

I have built this set to commemorate one of the most iconic cult sci-fi films of a generation that captures all the adventure of the chase to the final showdown between Agents J, K and Edgar.

The set comprises Agents J and K with standard issue MIB equipment including a ‘neuraliser’ and the 'noisy cricket', the classic MIB car which converts from standard mode to hypersonic mode and is complete with the big red button

The set also includes the Edgar figure complete with the Arquilian galaxy as well as the alternate cockroach mode Edgar with detachable abdomen to allow K to escape after Edgar swallows him and his favourite gun!

There is also Edgar's hijacked exterminator van complete with his flying saucer.

I wanted to make the set as playable as possible but also would look equally good as a display piece in the same way as the existing Ideas Back to the Future Delorean and Ghostbusters Ecto 1.

"The Men in Black - Protecting the earth from the worst scum in the universe!"

Thanks for your vote.