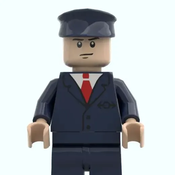 Hey LEGO fans!
Let me present to you this Swiss Electric Locomotive, reproduced as faithfully as possible from the SBB Be 4/6 locomotive.
A little history of this real locomotive:
1 September 1919, the locomotive was officially taken over by the SBB (Schweizerische Bundesbahnen / Swiss Federal Railways).
The first production electric locomotive was put into operation on February 1, 1920.
This was followed by services in commuter trains to Spiez and partly to Brig too.
After May 31, 1921, these locomotives were transferred to freight traffic.
I decided to build this locomotive, because I like retro locomotives and this model looks very elegant in the format of LEGO cubes.
This is a minifig-scale model. The model has a removable roof. Inside the model are: two electric motors, transformer, tool (4 pieces) and a tool suitcase. The set includes a figure of a train driver with a briefcase.
This model can be motorized with the 1x 8809 and 2 x88013 Powered Up kit.
Model info:
Length: 50 cm (45 studs), Width: 9 cm (6/7 studs).
Total parts: 1140.
I hope you enjoy it!