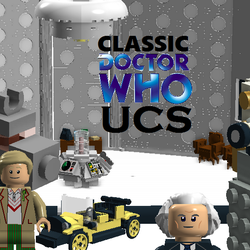 With the new Lego Doctor Who set coming out on December 1st all the Whovians and Lego fans will be able to own lego NewWho minifigures. But what about the classic doctors? Out of all the WHovians out there a lot of them a fans of the classic series. I lie the classic show too so I decided why not make something for it and put it on Lego Ideas? And wouldn't it be fun to own a classic Doctor Who lego set? I started by taking a model  had already made and changing it so it would open on the back. Then I designed the console, added a hat stand and built a clothes rack.

Now you can't have Doctor Who without the adorable and hilarious K-9 or the deadly and destructive Dalek so I decided to include K-9, a Dalek and Davros (because I have a feeling people would like to build him too.

Before I started designing this set I had to choose which doctors to include. The fourth doctor is the most popular classic doctor so I decided to include him. But the first one is the one that started it all so why not include him as well? Then I decided that there's still room for one more so I put the sixth one in. But every doctor needs a companion and since I based this mostly off of the fourth doctor's Tardis I made Sarah Jane to complete the trio (the fourth doctor, Sarah Jane and K-9).

Earlier I mentioned that I used an old model to create the model I used. The last picture contains the Tardis I built for this set and the Tardis I had already built. The first one opens on the back and the second one had opening doors and a fold down back with a stud on it to connect the console too, but no dots. Which would you rather have, opening doors or dots?

Thank you all for taking the time to read this post. I hope i like this project as much as I do. And I hope it reaches 10,000.