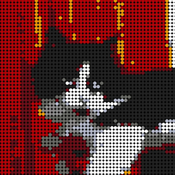 By LegoPerson11
108 comments
This vile creature has accumulated a gleaming hoard of treasure, ransacked from surrounding castles and displayed with obsessive precision. A hardy young band of knights approaches - optimists or fools - determined to vanquish the menace and free the land.
The lair itself is a natural cave with a smallish opening. Woe betide all who enter; as well as containing precious gold and jewels, this gruesome bolthole is littered with the remains of big game and human prey.
If you're a dragon you'll need to slither in sideways, but for the sake of playability, the back of the hill hinges open to reveal the inner sanctum.
The build was inspired by my interest in the middle ages, bolstered by a fascinating medieval podcast and kick-started by the launch of Namirob's "Medieval Blacksmith" set!
I hope it gets picked because it would make a nice addition to what I hope is a growing line of medieval-themed LEGO sets, and I had a lot of fun building it. Glad I hung onto the dragon and knights my children outgrew - the kids are grown up now, but some things never get old!