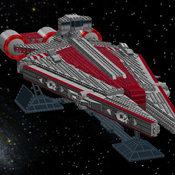 Hello! Here is my new project: the gs100 salvage ship

It's about a ship belonging has the universe of star wars the clone wars wars, it appears in several episode in the which r2d2 is to report missing during a battle, are anakin done everything an owner to find him and decide to visit has this ship which found it in the area to see if he did not have to find the litle droide. The ship in question is a ship has a purebred trandoshan reptile name of gha nachkt which measures battlefields to get back any kind of parts or object which can be resold as a droide for example. During his anakin visit is to accompany with its padawan Ashoka Tano and with a droide astromech to nickname goldy

The project which is not has the scale ladder of figurines usual lego but has the scale ladder of figurines smaller than one can find in lego board game, he is make of 2750 bricks. He is very to detail he contains 4 stage all served by an elevator, 4 crane, 3 landing gear, a banister of centred, a turret laser, a lamp of search, 4 reactor and full of other one detail

Floor 1: the cockpit, the cabin of commander and the hall giving onto the elevator and the banister of centred

Floor 2: the computer of edge and navigation in the center has the front the first hold or quite rooms parts got back are to store and has the back a computer or everything object contained in this warehouse are to list

Floor 3: has the front a space for the passengers, in the center the second hold with her too a computer for the search for object and has the back the machine room

Floor 4: one has the front hold has the goods in the center six container has waste and the hall of sorting and has the back the control station of the lasers turret