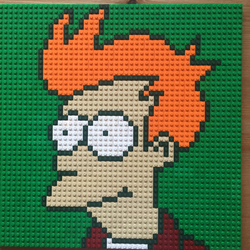 One of my favourite models is the Tower Bridge set 10214.  Building it is a massive undertaking and also a major investment!  A smaller model would be much more affordable and portable, and would make a delightful souvenir for visitors, young or old, to Tower Bridge.  Being smaller and a simpler design, it fits more comfortably on a shelf or mantelpiece and is an easier build for small hands.

This is a 1:4 scale model of set 10214, which would fit nicely within the smaller LEGO Architecture range.  A lot of detail from the larger set is still visible for such a small model.  I am particularly pleased with the colour scheme, although I would rather use 3x1 light blue tiles instead of white on the tower support chains.  I also do not have sufficient white 4x1 criss-cross fence panels for the middle sections, and so used grey instead.

It uses some interesting offsetting techniques and windows using headlight bricks on their side and upright facing inwards.  Inside each tower is a solid construction in a small space that makes up for the necessarily simple outer layer.  The iconic pivoting bridge can be raised and lowered and meets satisfyingly in the middle.

This model will fit nicely on a 32x16 blue baseplate, which could be framed with black 1 stud wide tiles in a style similar to other LEGO Architecture models.