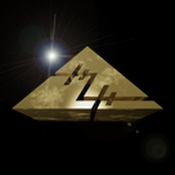 This model is a creative proposal which was built with a child imagination and a design supervision. The "lego-plane" is an attractive design for who want a good playing with a plane which has driven propellers, cargo space, a military aircraft shape, good aspect, and a simple engineering transmission. This model has common and technic lego pieces, as well as, that each of its views (top, sides, back and perspective view) keep an attractive form and elegance.

The "lego-plane" has a medium difficulty to be assembly, furthermore if some model parts would be replace by other commercial especial lego pieces, it have a lot of opportunity to become more a simple model, keeping the original idea.

The "lego-plane" is compound by; one pilot, four passengers, two propellers, two front wings, three back wings, three couple of tires, one little back tire and one transmission which is boosted by hand (this boosted could be modified by an electric motor).

Finally the model invites to the user to be engaged to the amazing world of engineering through its uncovered transmission system.

Why was it built?

Because this model represents the power of imagination and the capacity to create something unique and own, the "lego-plane" brings a personal design and it invites that persons follow their imagination, this plane carries minifigures and little sets to “fly by skies and space, where there is not frontiers”, thus the model boosts the creativity to make great stories. The "lego-plane" was built with intention that the plane be more a desired thing but not a plane object.

"One good lego set could route a life forever", It means a lot of people around the world found the profession of their life when they were children and it could have happened when they had a special thing which inspired them for one day in the future they became; an Architect, Engineer, a Builder, Pilot, Designer, Doctor and so on, for that reason the "lego-plane" could be able to engages a many to awake an especial thing within them.

Why it would make a great lego set?

The "lego-plane" is focused in one phrase; "An excellent design encompass a lot of benefits", according to that, it says the following words:

-An attractive form: Keeps a good shape through all its views. Furthermore, It could conjugate with others lego set with topic thereof, as an airport, planes set, or create a big airport lego set.

-A few pieces: It was designed with almost 155 common and technic lego pieces, as well as with a structural firmness. The whole pieces would be less some parts are replace by other commercial and special lego pieces.

-Reach to many: A international company seeks to cover all the world with its products, as well as all societies, for that reason a unexpensive set is a success to achieve, because many could get this kind of model. Many things are not within everyone's reach, but not this.

-A simple engineering machine: This is a good quality of the "lego-plane" which was designed to engages the users with a basic machine model, thus through its uncovered design, someone might observe how works its transmission system which It turns plane's propellers.

Thank you very much to consider it a as probable success.