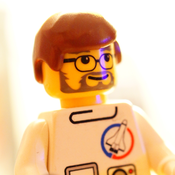 I have created this playable Lego Jenga set out of 2x10 blocks, tilled on the top with 2x2 tiles and the bottom with flat tile 2x2 inverted. I know that Jenga is 3x3 and i could have used 2x6 lego blocks, but i found the size of the pieces too small.  5x5 seemed to work very well, I stuck with that for my design and displayed this on Flickr in October 2013. I have also displayed this model for the past two years at the Great Western Brick Show and it has had a very positive and popular response from children and adults alike, one of the few interactive exhibits. With less friction than the wooden version it can be a bit more tricky to play, but i feel that makes it an even better challenge.