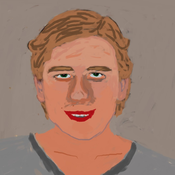 By Rojust80
9 comments
Build a car from the 1970s. The driver of the car is Peter, and Sophia is a waitress at the Lemonade stand. Peter is on a long journey, and he is getting thirsty, so he reaches a local lemonade stand where the waitress Sophia works. Unfortunately, the lemonade stand doesn't have Peter's favorite flavor, so he drives away in search of his favorite drink. When building this set, I was inspired by cars from the seventies and other LEGO sets. Includes a car, table with drinks and 2 minifigures. The set consists of 182 bricks, mainly chrome and metallic. The car is built of black and silver chrome bricks.