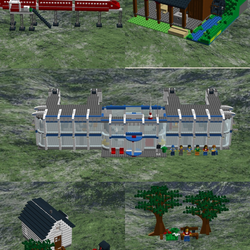 This Train rides on a custom built track that you can make easily with your own Lego.  It is uniquely built eight studs wide but still is made with a  normal train base.  The City sky train has power functions but because of the custom track it can't use the Lego train motor so it has a series of gears that grip onto the track and a motor on the other end that spins to move the train along.  The city sky train has 807 bricks (including the tracks) and four minefigures (a driver, two passengers and a ticket seller).  The train also has doors in between cars so minifigures can get in and out easily.  The cab can also open and close easily to fit a driver in.  The train rides 13 1/3 blocks higher than the surface and I can fit all of my Lego trucks and trains under it but if you need, you can easily build it up higher.

The city sky train also comes with a sky train station.  It is not very big but it does the job.  The station is the same height as the track.  It is on two 4x8 plates and includes seats, ticket stand, map of the trains path and a small cover.

The set will come with 20 sections of brick built tracks which are 320 bricks.