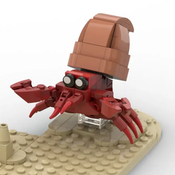 By ElSombreroBuildings
30 comments
ROBOTS
This one is my first project to be based on my original idea, and I'm not quite sure on how this one is going to do on this platform.
Anyway, when I was a kid, I liked to play with some robots I designed with my LEGO bricks, the good guy used to be a purple robot who would always fight a big yellow robot (who I named TOXIC), Toxic was very close to his brother (a robot that also was yellow but was smaller and had a very powerful weapon to disarm robots). The Purple Robot had a friend who liked to repair broken robots, this friend of his was the White Robot (my sister decided to give this white robot the name of Ape). These four characters were the first and main characters, and as time passed, I created new robots with unique things to them. But, one day, I grew up (at least I thought I grew up) and disarmed each one of them. 😥
But don't worry, I realised a year ago that LEGO doesn't need to be a toy and I built all the classic robots again, except this time I created new characters.
HEROES
- Purple Robot: He is a black and purple robot who tries to be a hero every time a menace to other robots is incoming.
- White Robot (Ape): He's the best friend to the main character.
- Red Robot: Uncle to the main character.
- Green and Blue Robot with an antenna on his head: He was a bad guy, but he turned good.
- Truck Robot: She was the best friend of the main character before the Ape Robot was designed.
- Small Yellow Robot: He never decides if he wants to go against the main heroes or if he wants to help his brother Toxic to defeat the heroes.
VILLAINS
- Toxic: He doesn't have any arms, or mouth. He's simply a yellow big machine with some sharpen fangs over him. He was the biggest menace, until the One-Eyed-Robot appeared.
- One-Eyed-Robot: He's a black robot who likes to see the Purple Robot suffer.
- Malware: She's a virus, a code, that can destroy Robots, that's why I decided to give her that transparent green coloured pieces.
- Frog Bot: He's a tiny robot that bullied the Purple Robot when he was little.
NEW DESIGNS (these do not have any story behind them).
- Pirate Robot.
- Cleaner Tan Robot.
- Pink and Blue Robots (they're brothers).
- Little White Robot with wheels.
Thanks so much for everything! 😀😀😀