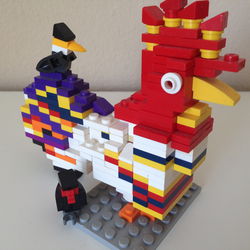 This is a 1/22 scale version of the Tesla Model S. It has many functions, such as 2 opening doors, an opening front truck with an engine, as well as an opening trunk.

I built this lego model because I have a relative who owns a tesla car, specifically this model. I really like the scale of this car because it allows me to build a car that is recognizable and at the same time would be cheap if it was to be bought (I have a digital version of this, and according to the software the build would cost around $15-25).

I feel this would make a great lego set because not many official lego sets are made in 1/22 scale. Not only that, but the ones that are are out of stock and do not have much playability. The lego car sets that do have many functions look much like the real thing, but is a bit pricey. My objective here is to have a lego set that is cheap but has a lot of playability!