By KingJosiahII
8 comments
This is one of those secret laboratory's that you always see, but this one has a bit of a twist. The evil scientist is a Fungiologist who mutates mushrooms and a wide assortment of other things. First she only experimented on mushrooms, but soon the experiments got out of hand, before long humans were being turned into mushrooms.

Please hit the green button which says "Support" if you could do this that could determine whether or not this set will become a reality.

There is a security guard who is becoming more and more suspicious of Dr. Young, two businessmen, a receptionist, and of course Dr Young and the test subject.

Amelia Young, the evil scientist, has set up her base of operations at Young Consolidated, a company devoted to robotics and the advancement of technology. Amelia is currently working in the secret laboratory which is hidden in Young Consolidated, performing her dreadful experiments.

The laboratory and building offers plenty of play, there is the coverup of the Young Consolidated building, which hides the laboratory, and the secret entrance into the laboratory. This project features six mini-figures, and a fire fighting robot which has several cool features. The whole set is very sturdy, it is built upon a solid foundation (three 16x16 baseplates). Check out the features of the laboratory below! 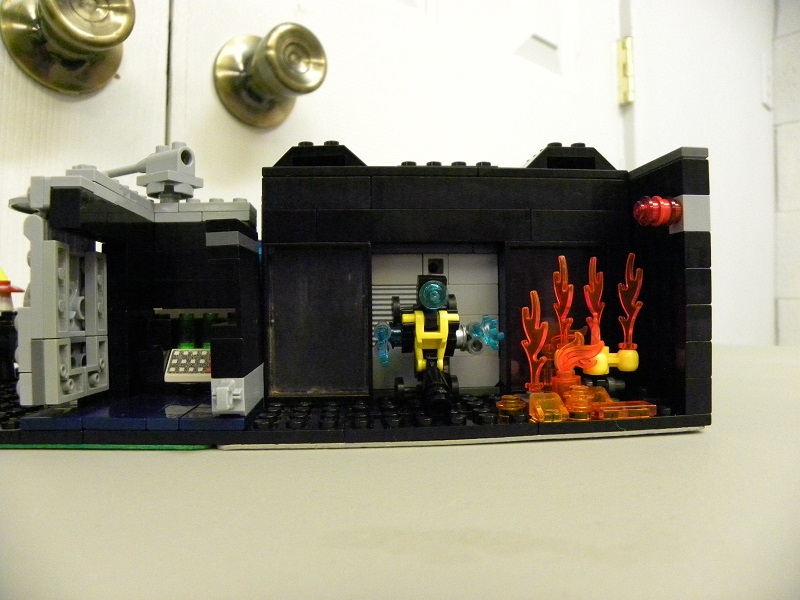 This is the fire fighting robot, it is also nicknamed the "Dog" for the wheels on its back allow to roll around quickly to respond to fires, the leg in the front of the "Dog" also looks like a dogs tail stuck up in the air. It has dual arms which spray the water upon the raging, but controlled fire inside the testing room of Young Consolidated. It has proven its worth many a time in the test room, but will it still prove to be useful in a real fire?

The hidden door by the testing room simply has to be pushed up, opening the way into Dr. Young's laboratory. But for extra security there is another door which can only be opened by the access panel. It keeps out any unwanted guests. The red light indicates that the test room is being used.

The gray door behind the "Dog" can be opened also, it operates just as the secret door-wall does in the test room. 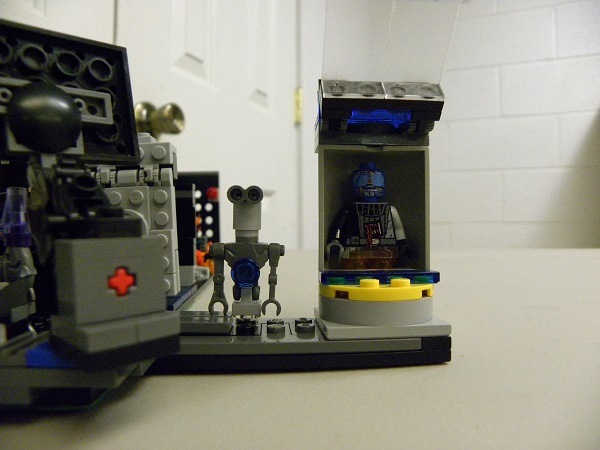 These are the two robots. The prototype is on the left, and the rebellious one is on the right. 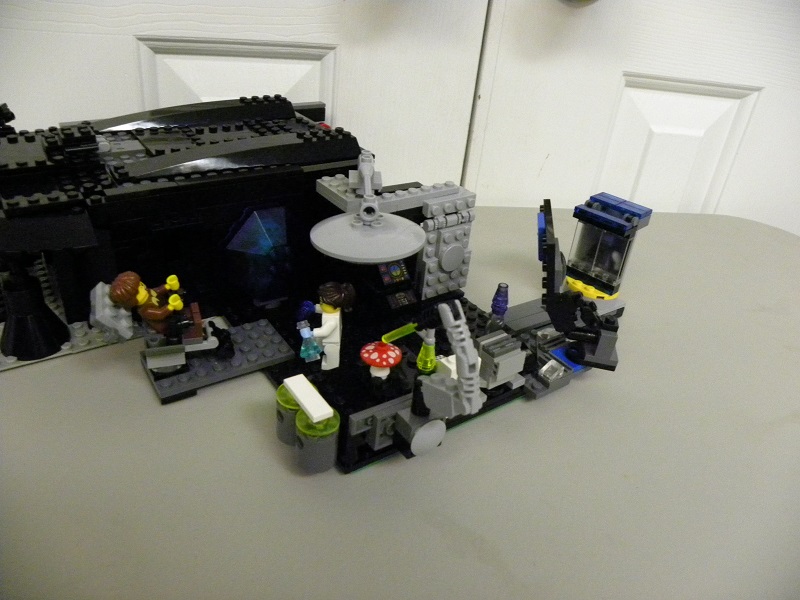 This is a full picture of the laboratory. The TV is very secure, so it isn't going to fall easily! The holding cell, (the round thing with yellow on the bottom) can turn in a full circle. You can lift the glass in front of it to release, or place in the prisoner.

This is a look at Dr. Young's laboratory. Dr. Young is perfecting the serum for turning the subject into a mushroom! She is also mutating a mushroom, so that it might turn into a human, or something worse...

There is a large light above Dr. Young, it is able to move side to side. There is a containment chamber at the back of the laboratory, and a TV also, (Might I mention, a flat-screen TV!) Don't let Dr. Young's cheerful and innocent face deceive you. The test chair can turn, and there is also restraining robotic arms which can be placed on the sitting mini-figure.

Although you can't see it that well, there is a prototype of a robot. Behind the blue glass by the test chair. 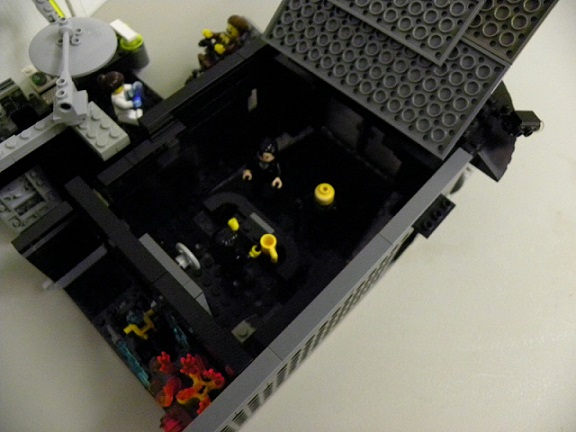 And this is the building with the roof lifted up, it allows for great playability. The two businessmen, that is father and son, are looking to invest in Young Consolidated. The test room has been activated just for this occasion. On the top right there is a security camera.

Not all of the detail has been able to be shown in these pictures here, so I will cover the unexplained details of the project, and show them to you all in a coming video.
-------------------------------------
If you want this to be a real LEGO Set, please support! The only way this project can get to ten thousand supporters is if the word gets out. So please share on Facebook, Twitter, and Social Media. Also feel free to inform me about what you like or dislike about this project!