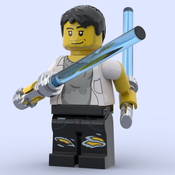 By Oculusswift
39 comments
For anyone who doesn't know League of Legends: LoL is a MOBA (multiplayer battle arena). It is a game that consists of two teams (5 vs 5). Each player is a unique 'champion' with a special role (e.g. Support, Tank, Mage...) and abilities. The goal of the game is to destroy the enemy base called the Nexus. After you destroyed the Nexus you've won the game.
I've been playing League of Legends for over 5 years now. I don't play as much as I used to but I still enjoy playing the game from time to time. The competitive scene of LoL is amazing as well, I still follow the LCS and LEC weekly. The game has a lot of lore and awesome characters that can be explored in Lego form.
I thought to myself why not combine the two things I love most. So I came up with the idea of Baron Nashor, the greatest monster of LoL. In game, slaying Baron Nashor is one of the most important objectives in the game because it gives you a huge push advantage over the enemy team. This place called 'Baron pit' is usually an area where the two opposing teams fight. They fight for control or to be the first team to slay the beast.
I made this design in Bricklink Studio. I just started using Studio five days ago. It took me two days to finish Baron Nashor. The minifigures exist of existing parts, none are custom at this moment but that can change. I'm not too fixed on the minifigure line-up as well since League has a lot of characters and roles.
The design of Baron Nashor was a tricky one, especially the round snakelike body was hard to figure out. The connectivity was also something I struggled with. But I figured it out in the end.