MX-97 Raider vs The Spider Tank 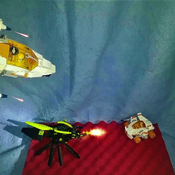 As the MX-97 Raider cruises over the Martian landscape, it notices a black spec on an near a trench. When he gets closer, he recognizes it as the familier spider tank. While he narrows in for the kill, he deployes the rover guncar. He then gets ready to fire a missle. When he does so, he notices a barrel flash on the spider tank. He tries to maneuver but it seems to late...

This project was born out of my love of Lego space. Esspecially Mars Mission. Because of this, I decided to make a new Mars Mission themed model based on some ideas I had been turning over in my brain for some time.

This model has many cool features. First the MX-97 has an internal missle bay with four missiles. Second, it has a high energy blaster under the nose. Third it has a removable rover which has two laser cannons. Also, it has vertical take off and landing. Lastly it is powered by a nuclear fusion crystal behind the pilot. The Mars Mission Special Forces designed the MX-97 Raider, after many unsuccessful fights with the Spider Tank. They now use the Raider for hunting and destroying them as well as many other Martian vehicles.

The spider tank was very fun to design. The vehicle's arachnid apperance makes it esspecially neat. Although well suited for destroying ground targets with its massive meltorox cannon, it can also shoot down flying targets with its two smaller meltorox guns. It is one of the Martian's go to vehicles for many opperations.

Thank you for taking the time to look at my model. If you liked it, please post it on social media. Also make sure to support. If you see any changes that could be made, please put them in the comments.