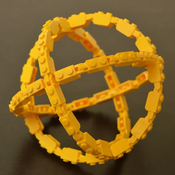 By Ailurus
14 comments
Inspired by a trip to Japan several years ago (in particular, to the Fushimi Inari shrine in Kyoto), I built this path of torii — traditional Japanese gates.
Initially, the challenge was to design the slightly curved top of the gates, which eventually resulted in this model. Afterwards, I expanded the scene using multiple torii in a curved path surrounded by bits of bamboo.
Although it was tempting to add other elements that are seen as typically Japanese (for example, a cherry blossom tree), I ultimately decided against it. However, I did add a small Japanese stone lantern (known as a tōrō) — can you find it?