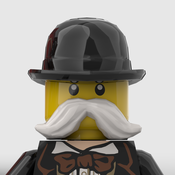 By Seppdemba
27 comments
Here you can vote on a real Victorian Classic.
It is 1863 – the Underground is just before its opening – while London's streets are crowded by horse-drawn carriages.
This creation shows a horse-drawn doubledecker bus how it may be used in London or many other European cities in the 19th century before motor buses were developed.
The bus is decorated with many details such as the route description and contemporary adverts on both sides as well as lanterns for night service.
The coachman has to stand on the coach-box during his entire duty under all weather conditions.
The model has a removable roof to give acces to the lower deck, which is fitted with two blue benches, lamps and a map. Have a glance through the windows made of etched glas.
The upper deck is accessable by a steep staircase and consists of three wooden benches.
Two carthorses pull that bus through the busy streets of the then largest city in the world.
I think this great piece of transport history would make a great LEGO set in each collection.