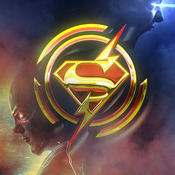 Welcome to the D.E.O. The Department of Extra-Normal Operations from the hit show Supergirl. This model is based off the secret organization that is a main part of Supergirl. It is not 100% accurate to the one on the show so I had to make it a little smaller to fit it into LEGO form.

The D.E.O. features one main control center, a lab/medical room, two miniature desks and the iconic pod that brought Supergirl to Earth.

This set also has six minifigures that include, Supergirl, Hank Henshaw, Alex Danvers, and three other agents.

Please note that some of the minifigures and computers do not have the desired prints on them. Some of the things I would like to have are:

-Supergirl to have a torso and leg print based of her's on the show.

-Hank to have a proper face print.

-Alex to have a better torso print resembling the one on the show.

-The computers to have info on an alien escapee, or something themed towards the show.

-And to have a few stickers on Supergirl's pod to make it seem more realistic.

If you are a fan of the show, or know people who are please support this idea so we can finally get a Supergirl set in the ever growing  LEGO DC Universe.