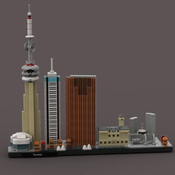 Toronto is the most famous city of Canada deserves a LEGO Representation.
This set contains 6 important landmarks:
Rogers Center: A multipurpose retractable roof stadium situated just southwest of the CN Tower Opened in 1989 on the former Railway Lands, it is home to the Toronto Blue Jays of Major League Baseball (MLB).
The CN Tower: At 1,815.3 ft built on the former Railway Lands, it was completed in 1976. Its name "CN" referred to Canadian National, the railway company that built the tower.
First Canadian Place: First Canadian Place is a skyscraper and serves as the global operational headquarters of the Bank of Montreal. At 978 ft, it is Canada's tallest skyscraper and the 15th tallest building in North America to structural top.
The Scotia Plaza: Scotia Plaza is a commercial skyscraper It is in the financial district of the downtown core. At 902 ft, Scotia Plaza is Canada's third-tallest skyscraper and the 22nd tallest building in North America. It is connected to the PATH network.
The Toronto City Hall: The Toronto City Hall, or New City Hall, is the seat of the municipal government of Toronto, and one of the city's most distinctive landmarks. It replaced the neighbouring Old City Hall, The new city hall is located adjacent to Nathan Phillips Square at the northwest intersection of Bay Street and Queen Street.
Nathan Phillips Square.-Nathan Phillips Square is an urban plaza in Toronto. It forms the forecourt to Toronto City Hall, or New City Hall, at the intersection of Queen Street West and Bay Street, and is named for Nathan Phillips, mayor of Toronto from 1955 to 1962.
Old City Hall.-The Old City Hall is the former City Hall building. It was opened in 1899, and replaced by the Toronto City Hall in 1965. In the same decade, with the construction of the Toronto Eaton Centre, the idea of demolishing the Old City Hall to make way for a series of large skyscrapers was considered. This plan met with great opposition from the community, and in the end was not realized. It is now the home of Toronto's municipal judicial courts.
Enjoy the IDEA :)