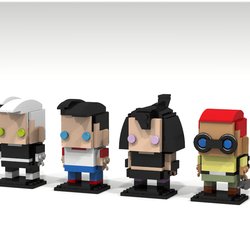 This is my project: it consists of 4 brickheadz figures based on the characters of the nickelodeon cartoons "Danny Phantom" are the main characters: Danny (ghost and human), Sam and Tuker. I decided to build this project because danny phantom is one of my favorite series in life and many more and I would like to see a lego set based on danny phantom.