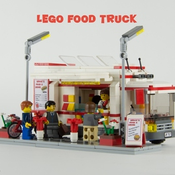 Life at Lego City is very fast and Lego people haven't got much time for lunch during the break. If your minifigures want to have a quick meal, what they need is a Food Truck!

The food truck has a linear and simple white and red design. On the right side, where customers can buy food and drink, the wall can come out from the vehicle, expanding the entire play area inside the truck. It has got a lock pin so it can be left opened even without the roof. There's a big door that can be opened horizontally on this wall, leaving space to the serving counter and mustard and ketchup dispensers. Here customers can order their food and take it directly from the street like in real food trucks. The rear is detailed and a large window take place on it.

On the other side, next to the small door where chefs get in, the entire wall swings out for an easier access to the interior, even with the roof. You can see two external units, that make the model more realistic.

The roof is a single piece and can be removed in a very easy way thanks to small handles built in it. Three large flap windows ensure a correct lighting of the inside.

The interior is quite detailed. A grill, fridge, kitchen sink with soap dispenser and a small sideboard take place in the model. There are lots of objects chef can use: a pan, fire extinguisher, broom, brush and food pincers. Included in the set there's also some food and drink: two hotdogs, croissant, chicken thigh and two cans. The floor is built with 2X2 plates with single pin (Part No.6126083), so minifigures can be put in every position you want, with no limits.

The set includes a small street strip where customers can wait for lunch and eat at two small round tables. There are also two vases with some flowers and a bin.

I propose five minifigures for the set: two chefs, a male and a female, and three customers, two men and a woman. There are a bicycle and a food truck sign too.

In summary, main model features are:

So, if you want to taste some special street food at home support the Lego Food Truck and share it with your friends! Thanks!