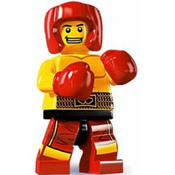 By Martin_LegoSK
19 comments
.The Ancient Greek Trireme.
Hello! I´m introducing you my lego idea called The ancient greek trireme :)
Trireme was a ancient vessel. The trireme derives its name from its three rows of oars. This ship played a significant role in the Persian wars. The athens leader Themistocles persuade the Athenian assembly to start the construction of  200 triremes and these ships defeated the persian navy in the battle at Salamis.
I was studying about triremes and they fascinated me so I decided to make a model of this amazing ancient ship.
The model is made of 2 types of wood and many details such as:
- a helm
- a decorative pedestal with golden angles
- columns with owls
- a sign "trireme"
- an anchor
- 2 types of oars
- red and white sails
and more
This Lego model can be a great one for every lego fan and especially fans of ship modelling, it may also beautify a home as a nice decoration.
So please if you like my idea don´t hesitate to            SUPPORT!
Thank you :D