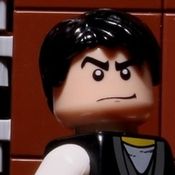 My Kung Fu is Stronger than Yours

Scrawny kids around the world wanted to be Bruce Lee. Or Jet Li. Mouths full of popcorn, they watched countless shaolin monks and peasants fight for honor. And in trying to make their Kung Fu stronger, probably whapped more than one sibling or friend.

This set is modeled after traditional Chinese tea houses, the quintessential setting for a Kung Fu fight. The first floor features a tea bar, tables for patrons, and a dim sum cart. When the dumplings start flying, the fight can move to the staircases and up to the second floor. The second floor would include lattice woodwork that evokes Chinese architecture, makes for an interesting build, and breaks apart satisfyingly during fights.

Kung Fu movies span from ancient China to urban America so there is a wide range of possibilities for minifigures. My initial lineup includes a wise old master, the hero, the rival, and two tea house workers. I would love to include a Shaolin Monk, a female fighter, and an African-American martial artist. This is the part I will be tinkering with the most and I welcome suggestions from the LEGO Ideas community.