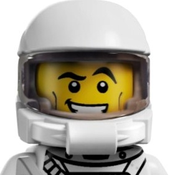 I present to you the iconic Hornet, the front line space fighter of the UEE fleet and favorite of intrepid space pilots everywhere.

This space fighter is one of the stars of the upcoming crowdfunded video game success STAR CITIZEN. Boasting well over 500,000 people signed on to be citizens in the galaxy, and having raised in excess of 50 Million dollars, STAR CITIZEN is a sci-fi franchise that will dominate in the years to come.  This universe promises to be a fantastic adventure, and people are excited about it.  It is a universe in which your imagination can run wild, and you can be the spaceman or woman you always dreamed of being. This idea ties directly into values LEGO also promotes.  Joining LEGO with this endeavor is a great idea because everyone loves spaceships, especially LEGO spaceships, and STAR CITIZEN has lots of them.

The Hornet is a fan favorite in Star Citizen, and this build represents it well.  With accurate detailing and awesome functionality, LEGO fans of both STAR CITIZEN and spaceships in general will love it.  This medium skill set presents interesting building techniques and parts usage promising to both surprise and educate the builder.  Here is what the builder can look forward to in the model:

The Hornet also has a solid loadout for engaging hostile aliens or angry space pirates including:

Finally, this set would also include a sticker sheet to add the following details:

If you are a sci-fi fan, a spaceship fan, a STAR CITIZEN, or just a cool LEGO fan, please consider supporting this project and adding a great space fighter to the LEGO lineup.