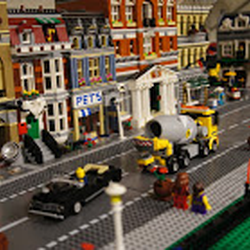 I have a big LEGO city made up of two separate islands in my basement, and I have been working on it for many years. But one day I realized that my city had a serious fundamental problem… it was divided in half.

When I realized that I had a problem, I searched and searched for LEGO bridges made in a minifigure scale but couldn’t find any sets made by the LEGO Group.  At first I was discouraged and almost gave up on my city, but I looked at all my poor LEGO minifigures that would be separated from each other forever if I didn’t find a way to connect the two islands, and I was determined not to let them down. So I decided that I had no other option; I sat down and designed my own bridge, and after many hours of hard work, here is what I made!

I proudly introduce to you the LEGO Train Bridge! My bridge is a combination of Ottoman and 18th century eastern-european building styles with a touch of pure LEGO imagination. The bridge measures  18 inches long, 8 inches tall, and 7 inches wide!  And with an impressive yet manageable 1700 pieces (approx.), this bridge is sure to shine in any LEGO fan’s collection!

I decided to post this project on LEGO ideas because I thought LEGO really needed a simple yet elegant bridge in minifigure scale.  A bridge would fit nicely in many people’s cities. It could also inspire many new ones since it practically begs to be connecting two landmasses! I also thought that since it has a train track running over it, it could motivate people to make some incredible LEGO train collections!

Dimensions and piece count could be altered for sales purposes. Also, the train tracks could be replaced with a road for cars to pass if necessary (that idea would work better if the width was increased a little bit).

Your support and comments regarding my project would be highly appreciated! If you want to see my project on store shelves sometime soon, you can make it happen! All you have to do is press the support button at the side of the page, and with your help, this project could be an actual set!