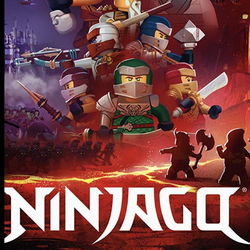 By Ninjagofan16
37 comments
Oh no. Nearing the edge of the river, the couple can see the waterfall ahead. They panic, but over they go, tumbling down the waterfall with water crashing down behind them. With beautiful scenery, jagged rock faces and rumbling water, this display model is great. Featuring various animals such as a shark, tortoise and rabbit, plus a birds nest complete with an egg, this set is detailed and intricate.

i built this because I have always wanted to go over a waterfall, so I thought about it in Lego version. This model is not of me, but describes the notion of going over a waterfall.
i think this would make a great display set because it is like the real thing, and it looks like someone has taken a picture and made it in lego, as the people where half way down the waterfall. I recommend it 9 + as the cliffs are quite fiddly.