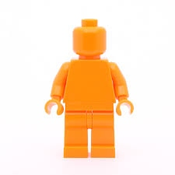 This strong, hard-working mechabeast is made to transport goods and people across towns, battle zones and all types of terrain.

Made from RedRok Steel, the hardest metal known to Minifigure kind, the GTR is almost indestructible making it the perfect transporter. This is also why it was made in the form of a Gorilla, one of natures strongest creatures.

Produced on a mass scale it is now one of the main forms of transportation for minifigures in every form of life. The GTR is only the first though in the long line of mechabeasts...

I made this one day when I was just playing around with some random bricks and thought it looked quite good so made a few changes. Load (minifigs and other bricks) can be placed on the arms, bridge (back) and rear. However I am looking for ways and bricks to improve that end. I would have this on shelves at around £3.00 probably as it is about the same amount of bricks as Mixels (which are £3). This allows LEGO fanatics to buy boxloads of them but also kids to get a few (over a month or two) with their pocket money. I know I'm thinking way ahead and I'm not really expecting anything more than 100, let alone 100,000 but I like to do this with all of my Ideas projects.

There will hopefully be more. I do currently have a kangaroo but it is only really a 'spare parts build' and not something I feel like submitting, but I will post it in the updates just to show you what it looks like. Maybe one day, after some improvement, you'll see it as a project...

Plz give your support and comment on any ideas for future mechabeasts or improvments for the GTR. I will do my best!