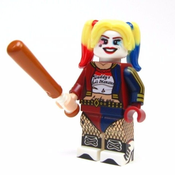 Poison Ivy, Harley Quinn and Catwoman have broken into Gotham national bank, it's up to Batman and Batgirl to stop them before they escape.

The set takes place in the Gotham city bank, there are two rooms, the main entrance and the vault room. There are bars scattered across the wall for Catwoman to climb on (like in the arkham video games), there is also a bar system across the ceiling for Catwoman to crawl across. In the vault room there is money piled across the room, there is also a seesaw to make the wall pop out of place, to give the sirens a way to escape the building. On the roof there is an entrance to the ventilation system that any mini figure can fit through. Catwoman also has her purple motorcycle inspired by her very first motorcycle.

There are 5 mini figures in this set, Poison Ivy, Catwoman, Harley Quinn, Batman, and Batgirl. There is also Harley's two hyena's Bud and Lou.

Poison Ivy- her accessory is a plant whip.

Catwoman- her accessories are, two steel claws, one whip curled up, one whip extended, and she has a blonde hair piece that can be swapped out for the mask with goggles. Catwoman also has a purple motorcycle inspired by her very first motorcycle

Harley Quinn- her accessories are, a baseball bat, giant mallet, and her two hyena's Bud and Lou.

Batman and Batgirl both have 2 batarangs.

Why Did I Create This Set?

There are many play functions in this set, like a ventilation system on the roof, for mini figures to pass through,  there are also plant stud shooters guarding the vault room, a grate across the ceiling for Catwoman to climb across, and an exploding wall for the sirens to escape through.