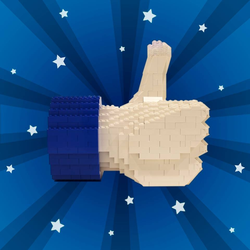 The "state of the art" spaceship is made from left over parts that people store in storage. this ship is mainly for display and I strongly advise that children avoid playing with it. However, if children want to play with it there is an area for a minifigure and a small glider.

It is mainly as I said, composed of spare parts, such as the piping from the ice cream machine in the Lego Movie Line and various other sets. It takes some patience to get most of the angles right but there are few Technic parts so it is relatively easy to build.

Stay tuned for updates in the news feed. I'll be uploading the image of the glider and the individual modules soon.