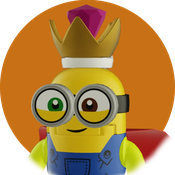 By Brainless__Owen
16 comments
This is the first project I have made specifically for LEGO Ideas. I was bored in the middle of the night, and I was thinking of things it would be cool if Shaggy and Scooby were in. And then it hit me. Shaggy and Scooby BrickHeadz. I knew there had already been LEGO Scooby-Doo sets before, so it would probably be an allowed IP. So then I just had to make it. To be honest, I didn't know what to do for Scooby, so I used the design for the Pluto BrickHeadz and worked on it from there, but I think it turned out pretty well. (P.S. I don't know why it made me crop the image weird).