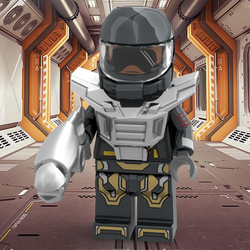 The Empire State Building is a 102-story skyscraper located in Midtown Manhattan, New York City, on Fifth Avenue between West 33rd and 34th Streets. It has a roof height of 1,250 feet (380 m), and with its antenna spire included, it stands a total of 1,454 feet (443 m) high. Its name is derived from the nickname for New York, the Empire State. It stood as the world's tallest building for nearly 40 years, from its completion in early 1931 until the topping out of the original World Trade Center's North Tower in late 1970. [...] The Empire State Building is currently the fourth-tallest completed skyscraper in the United States (after the One World Trade Center, the Willis Tower and Trump International Hotel and Tower, both in Chicago), and the 25th-tallest in the world (the tallest now is Burj Khalifa, located in Dubai). [...]

The Empire State Building is generally thought of as an American cultural icon. It is designed in the distinctive Art Deco style and has been named as one of the Seven Wonders of the Modern World by the American Society of Civil Engineers. The building and its street floor interior are designated landmarks of the New York City Landmarks Preservation Commission, and confirmed by the New York City Board of Estimate. It was designated as a National Historic Landmark in 1986. [...] (Source: Wikipedia)

Let's see if you'll be able to support this LEGO Set and reach each number of supporters.

A huge thank you goes to the LEGO Ideas Community for the support received. It means that I made a good work and that people are appreciating it. I think this Set would definitely fit into the LEGO Architecture Collection, so keep supporting this project and we'll be able to make it into an official LEGO set!