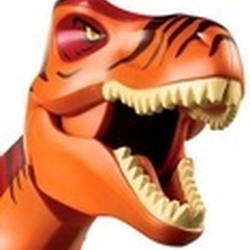 This is among my favourite vehicles from the Star Wars saga and I really wanted to show my take on it; this is ment to be a simple, cheap (costwise) and  playable set. Despite its relative semplicity this model has plenty of features: the main cannon can pivit up and down,and the gear situated below it allows for a full 360° rotation; on top of the main cannon there's an openable hatch that reveals enough room for a folded battle droid to stay in.

The side canons are also able to pivit at any angle, the roof easly comes off to allow the placement of a second battle droid inside the tank; and last,but not least, two slots at the back of the tank can hold the minifigures' weapons while both of them are driving the AAT.

I tried to design this vehicle as accurately as i could at it's scale, and I'm sure it'll make a nice additon to any phantom menace scenario, or your battle droid army.