Temple of the Ancient World 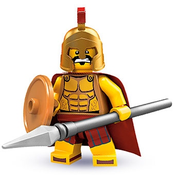 This is my classical temple, a building of age Greek or Roman. A sober, symmetrical and elegant santuary of walls and columns in light gray. Inside is the statue of the goddess, in the sacred enclosure, where only the ancient priests had access . The female deity is a minifigure of series 12: The Battle Godness.

The roof is divided into three sections, this allows to mount and dismount easily to gain access to the interior of the building.

Construction time has been rapid: one week. But it took me more than three months to get all the pieces. After a few years collecting pieces of lego, this is my first project of certain size.

I hope you like it. My kids love much the temple, even though they want to remove columns to park their lego cars.