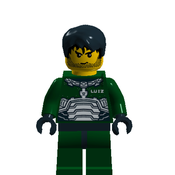 Spy Hunter is an overhead view, vehicular combat game that was released in arcades in 1983. It has become an arcade classic.

The game draws inspiration from James Bond films and was originally supposed to carry the James Bond license.

The object of the game is to drive down the road in the technologically advanced G-6155 Interceptor car and destroy various enemy vehicles with a variety of on board weapons. Throughout the game, the G-6155 Interceptor is upgraded with new weapons when the player drives into weapons van scattered across the levels of the game.

The game’s controls consisted of a steering wheel in the form off a futuristic aircraft-style yoke with several special-purpose buttons, a two-position stick shift (offering “low” and “high” gears), and a foot pedal used for acceleration.

The Transport Truck features a removable top and hinged door, which doubles as a loading ramp. It also features a mechanic bay with tool storage, a diagnostic computer, and a Spy Hunter arcade game.