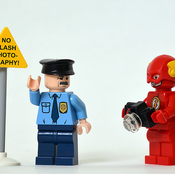 This is the Enforcer Plasma Mech, that I have created. My mech features a plasma gun, posable limbs, 2 flick missiles, and a cockpit for my figure.

The arms on my mech are ball joint and brick swivel pieces combined to make an arm, my arm's feature a flick missile on each limb. My mech's legs have a unique but some what strong structure that can last a small fall or hit.

The Enforcer Mech comes with a plasma gun with tubing attached to the back of the arm equipped with a core from which the energy is generated which is then contained in the blue container on the right arm.

My mech can be used as a gentle giant used for protection of humanity or an evil machine created for destruction, you decide. If you like my project please support it.