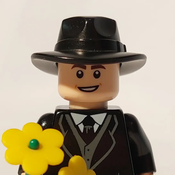 Many books and films have been imbued with the romance of the Wild West, from the middle of the 20th century to the present day.

We all know the image of a fearless cowboy going his own way. He does not always do the most plausible deeds, sometimes even break the law, but at the same time he confronts even greater villains, brings justice, reaches his goal and goes into the sunset to a beautiful melody.
19th-century America, however, was not inhabited only by gunslingers and bounty hunters. A large number of people lived quite calm and peaceful lives. Sometimes even the fastest hand of the Wild West could find himself in such a lifestyle. In order to feel like a retired outlaw enjoying a pacified and calm life, I present to you my set - Wild West Ranch.
We have five characters here: a cowboy who still carries a weapon with him, his wife, son, old family friend and former accomplice.
The house is made in the best Wild West traditions. Everything is quite minimalistic. The colors are as close as possible to the natural materials used in building: wood, roof tiles, etc.
You can get inside through the main entrance, the backyard door, or a small door that opens onto the veranda.
One of this set’s features is the removable roof that opens up the upper floor. There is only the Old Man's room here.
After the roof the upper floor is removed, which makes it possible to play with 4 more separate rooms :
The rest of the space is occupied by a hall and a dining room, united by corridors. Each room has everything needed for the inhabitants of the house: whether it be a stove in the kitchen, a mirror in the bathroom or a piano and a fireplace in the living room.
There are typical farm items near the house: potato bins, a bucket,some tools. There is also a carriage. It is small, but roomy and convenient. The sparse vegetation of the wild prairies is common on the ranch. But a large sprawling tree grows nearby, allowing you to hide in its shade on a sultry day.
The set itself consists of around 2,800 pieces and was inspired by a video game about Wild West.
I hope you liked it so much that you are ready to vote for it.