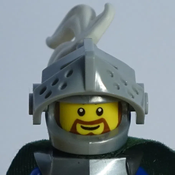 The Idea
My children love to play with my old classic castle sets. Thus, I've created a castle for them optimized for playing. Of course, the requirements of a castle for playing are different compared to one that has a visual focus. The Fortress of Portasol has less detailed roofs, rocks, and floors, but it is very stable, very good playable and has a lot of functionality and space (see the VIDEO at the end of the story!).
The Fortress and its Functionalities:
The Minifigures and Accessory
Child Approved
The Story The kingdom of Auqilatan consists of several territories that are protected by high Lords and their families. The Northern Territory governed by Lord Roderick is the protective barrier against the Lords of the dragon folks, who tried several times to invade coming from the north. The natural barrier of mountains and lakes, forces everyone to go alongside the northern capital city, Portasol. It is the door to the south and thus one of the highest protected fortresses in the kingdom.
During the last years the attacks to Portasol increased. The dragon lords began to band together. But what worries Lord Roderick the most are the rumours and stories from villagers and scouts about dragons that fight aside the dragon soldiers. Even such a stronghold as Portasol is not prepared for an attack of dragons.
In his concerns, Lord Roderick wrote a letter to the king begging for help in this difficult situation. When the king read about this new danger, he did not hesitate and summoned all blacksmiths, carpenters, and scientists nearby to develop a new weapon against dragons. Within short time, they built a new sort of ballista with such a penetration power to overcome the dragon scales. Immediately, the king sent out his strongest Paladin Sir Theodor together with additional soldiers to bring this new weapon to Lord Roderick.
Autumn is coming. Fog comes up the ground of Portasol. The guarding soldier that sits on the wall is seeing something but cannot identify what it is. In these times, Lord Roderick ordered that every arrival must be signalized by the city bell. Immediately, the soldier runs to the bell to inform everyone. Only a few minutes later the wall is full of the inhabitants watching out whose coming. Is it the announced help from the king or a force from the north?
Now it is up to you to finish the story! Vote for this castle, press thumbs that it gives a set and then take the chance to experience, play or reconstruct all the different endings that you can imagine.