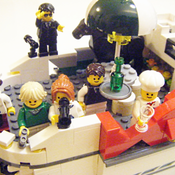 Image 1
“Fish + Ship” is a floating restaurant that serves more than just fish n chips. The black box with plus (+) sign is the air conditioning unit which regulates the temperature in the ship. Above the green and white umbrella is a blue windsock – useful for people at the barbecue to know the wind direction.

Image 2
The parrot is a reminder of the ship’s former name: “Parrot”. There are two black telescopes for patrons to view the surrounding sceneries and many yellow lights to keep the deck bright at night. The protruding logos of red fish and grey-green ship are eye-catching and give the deck more space with width of 12 instead of 10 studs. The fish has yellow light under its pectoral fin while the ship has water tap and sink at its stern. Under the umbrella is yellow light to illuminate the round table at night. White steps lead to the upper deck while glass panels behind the yellow flowers let sunlight into the lower deck.

Image 3
The fiberglass shark is a marketing attraction, photo opportunity, and also saves the environment. Step on the black pedal between the barbecue pit and the green plant to open the shark’s jaws for disposal of empty drink cans which go directly to a recycling bin under the barbecue pit. Besides barbecue, the top deck serves a variety of drinks and desserts.

Image 4
The entrance is at the stern and has a neoclassical appearance with clean modern lines. The grey steel structure below the entrance supports the bridge that connects to the ship.

Image 5
The reception/dance floor is a mosaic of a white yacht in a dark blue sea against a background of light blue sky, green island, and yellow sun. Hanging on the wall beside the piano is a painting of a sailing ship, below which is a model of the ship in a bottle.

Image 6
Glass panels below the ceiling let sunlight into the lower deck. Hanging above the bar is a green lamp. On the wall is the menu, below which are bottles of recommended drinks.

Image 7
The dining area has panoramic windows with red lava lamp between two tables. The aquarium separates the dining area from the steps leading to the upper deck.

Image 8
The bar is well-stocked with bottles of various drinks arranged against the wall and in the glass cabinet below the countertop.  The kitchen is elegant and functional. A long wooden cabinet with glass panels separates the kitchen from the dining area.

Image 9
The beige countertop is where prepared dishes from the kitchen are placed for the waiter to pick up and deliver to the diners. Below the countertop are four wooden drawers containing cutlery, napkins, bowls, plates, cups, and glasses.

Image 10
The set comes with an adjustable bridge hinged to a pier which connects to other sets such as Lego’s modular buildings.

Image 11
If you like crab or other seafood dishes, follow the red arrow to the ship restaurant.

So I created something different – a ship unlike other Lego ships and also a unique “modular building”. I thought that Lego’s standard hull was a great design and what we needed was to build more ships creatively using this “seaworthy” hull.

I hope that Lego fans want to add this to their collection because it fits with and is different from Lego’s modular buildings. This can be a step toward broadening Lego’s product range or introducing a new play theme to satisfy the strong demand of Lego fans for ships and modular buildings. It will look outstanding, whether placed among ships or buildings.

Efficient and effective, this set maximizes all features within Lego’s standard hull so that the model has much playability as a standalone set and can also be attached to Lego’s modular buildings or complement Lego City sets. It proves that Lego is great, not only in creating replicas of things that exist, but also for creating new and fantastic things. It aspires to be: