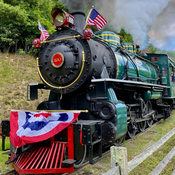 The park's history goes all the way back to 1866, with the founding of the East Tennessee & Western North Carolina (ET&WNC) Railroad. The line, which began operations in 1882, ran from Johnson City, Tennessee to Cranberry, North Carolina, a total of about of about 32 miles. The line was built to transport iron ore from the mines at Cranberry to the furnaces and interchanges withe big, standard gauge lines in Johnson City. In 1919, the track would be extended 34 miles to Boone, North Carolina, bringing the total up to 66 winding and steep miles through the heart of the Blue Ridge. The nickname "Tweetsie" would first be associated with the little train in the 1930's, being derived upon the high-pitched "Tweet" sound of the whistle, and the unmistakable echo, ringing throughout the mountains. In August of 1940, heavy rainstorms would end up flooding the Railroad's extension to Boone, and due to the high cost for repairs, the ICC authorized abandonment, leaving only the original 32 miles between Johnson City and Cranberry remaining. The line would struggle on into the 1940's, but by October of 1950, the narrow gauge would be nothing more than a memory, or so everyone thought.
As luck would have it, one of the locomotives, #12, built by the Baldwin Locomotive Works in 1917, would be saved by a trio of businessmen from Virginia, who shipped the engine north to Penn Laird, VA, to become the centerpiece of their new tourist operation, the Shenandoah Central. Unfortunately, the little line wouldn't last too long, as in 1954, Hurricane Hazel would storm through, wiping the little railroad off the map. Like the ET&WNC before them, the 3 men had no funds to rebuild their railroad, so the engine was put back up for sale. One of the potential buyers was Hollywood cowboy legend Gene Autry, who planned to move the locomotive to California for use in the movies. However, he ultimately found that moving the locomotive across the country would cost too much. In the end, Tweetsie would be acquired by Grover C. Robbins Jr. of Blowing Rock, NC, who planned to return the locomotive to the North Carolina mountains to be restored, and eventually operate. After sealing the deal, in May of 1956, the locomotive was sent to the shops of the Carolina & Northwestern Railroad in Hickory, NC for a full restoration. It's arrival was a cause for much fanfare, and North Carolina's governor at the time, Luther Hodges, officially proclaimed May 20th as "Tweetsie Homecoming Day." Finally, by 1957, #12 would be moved to her new home, and the high-pitched "Tweet Tweet" sound of the whistle rang throughout the Blue Ridge Mountains once again after nearly 2 decades, a sound that still rings true in the Blue Ridge after nearly 65 years.

The LEGO version of this iconic theme park train includes a LEGO model of ex-ET&WNC #12, which has been built to LEGO Standard Gauge instead of LEGO Narrow Gauge, as there are no proper straight sections. The Locomotive has been built to reflect the prototype as accurately as possible. Behind it is a small tender, which carries a simulated coal load. Next in line are 5 open-air passenger cars, which give the passengers unmatched views of the scenery and action. The Rear passenger car also includes an observation platform for the conductor.
But the passengers aren't the only ones in for the ride. Also along for the trip are Tweetsie's cowboys. 2 of them happen to be the dumbest train robbers in the Blue Ridge Mountains: The Flaming Hot Sauce Bandits, Texas Pete and Tabasco. Luckily, the Sheriff and Deputy are also on-board to keep them in check. The other minifigures included are Marshall Josie, the engineer, the fireman, and the conductor.
In designing this project, my focus was on one thing, and one thing only: the train. Essentially, I wanted to make a solid, no-frills LEGO train set without many of the associated gimmicks found in these kinds of sets, especially in regards to steam trains. Ultimately, I felt it best to leave out any accessories, leaving room for a larger train.

Every project posted on LEGO Ideas originates from a place of passion. A passion for the little plastic brick, and the passion for the object and/or property being represented. For many of the IP-based LEGO Ideas projects, many of these projects are created from childhood nostalgia. Sets like Minecraft, Back to the Future, Voltron, and the recently released Sesame Street set all tie into that idea of childhood nostalgia. Tweetsie Railroad is that for me. Tweetsie Railroad was my favorite place to go as a kid, and even today, I always look forward to a visit to what I consider my happy place. This project is my ultimate love-letter to LEGO, and the Tweetsie Railroad, and comes from a strong place of passion for both. At the end of the day, I realize that Tweetsie has never really been, or will ever be considered a household name. However, as obscure as Tweetsie may be to folks outside of North Carolina, I see a strong potential market for this set. The prominent use of red and green could easily allow this set to act as a solid Christmas Tree or Winter Village train, while the colors not being too over the top allow it to more easily work within a regular LEGO Train layout without sticking out like a sore thumb. I realize that this project has a slim chance of passing the LEGO Review board, should it ever hit the magic 10,000 suppporter mark, but the best I can do is to state my case, and really show the passion I have to the LEGO Ideas team.